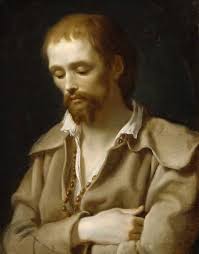 A diptych of two fools: one certified by his family, the other canonized by his church.

Saint Benedict Joseph Labre was a fool-for-Christ, a “holy” bum: he tried desperately and more than once, but couldn’t make it as a Trappist or Carthusian, so he went “on the road”. Last week  I made a pilgrimage twice to the Roman Church in which he’s buried, Santa Maria ai Monti. I just sat at his tomb, reflecting on his craziness. I might have said a prayer that he should think about guiding my “pilgrimage” or at least putting the wind behind my back, but I’m not much on piety these days and Labre is dead, after all. However, it’s true that my long walks are taking me into churches. I’m “haunting” the churches of Rome and getting “that old feeling”. This is probably not good.

I wouldn’t want, as an old man, to revert to a wrinkled version of the boy I was, the boy who would play that ultra-romantic piece “In A Monastery Garden” by Albert Ketlebey*** on the phonograph over and over, while he read The Imitation of Christ, and cried his heart out because he wanted to be in that “garden” with the monks. Won’t be going back to that in my right mind.

The thought, however, has risen to consciousness, after a second glass of wine, that it might be interesting to stay in Rome and haunt churches, like dear Benedict Joseph. It seems an adventurous “old person” thing to do. I could even stop shaving and sit on church steps with my hand out and see what happens. Hmmmmmmmm. Prendo un altro vino rosso, per piacere. [“I’ll have another vino rosso, please.”]

Thomas Merton, when he was a young monk, loved hermits and bums whose lives never seemed to get anywhere. He especially admired Benedict Jospeh Labre and mused that he would rather be “on the road” like him most mornings than in his “comfortable” monastery. Merton did have problems, however, imagining himself as flea-infested as poor Benedict Joseph was most of the time.

Below is my last podcast until I begin walking the Camino to Santiago de Compostelo in Roncevalles, Spain on September lst.

***For those among you who also read the Imitatio Christi in tears while playing Ketelbey’s “In A Monastery Garden”, check out any number of versions of Ketelbey’s “masterpiece” on You-Tube and ascertain how it’s working for you today. If you start swooning again, email me at <montaldo@monksworks.com>: I own the patent on the antidote.